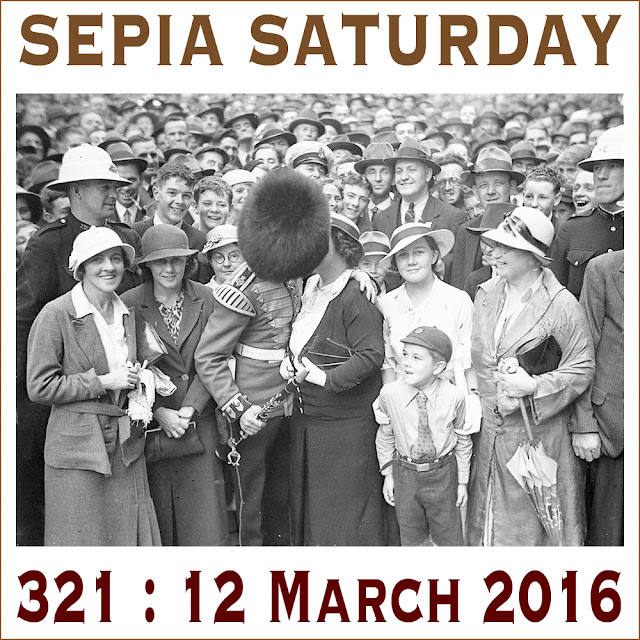 I know we have kissed before - it's no secret is it! We first kissed back at SS87 (and I don't want to be suggestive but I note from Marilyn's excellent list of Sepia Saturday themes that six weeks later we were sleeping together and nine weeks after that there was a child on the scene!) We kissed again at SS156 (and five weeks later we were scoffing oysters but that is another story we had better not go into), and here we are at SS321 and we are at it again. We are at it, so to speak, in Sydney, Australia and the year is 1934. And in this photograph by Sam Hood from the State Library of New South Wales, what we have is a Grenadier Guard bandsman kissing the 1930s equivalent of a "groupie". You can go where you want with this prompt - all you need to do is to post your post on or around Saturday 12th March and add a link to the list below. Before you start snogging, take a look at what awaits you around the sepia corner. 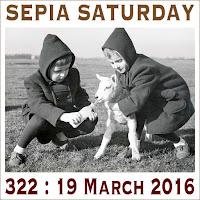 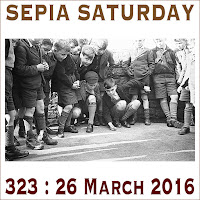 That is all for the future, for the moment let us just remember what Dooley Wilson sang in  Casablanca: "You must remember this / A kiss is just a kiss / A sigh is just a sigh / The fundamental things apply / As time goes by".

I ran out of human kisses and had to step up to animal smooches.

one human, on animal kiss from me too, plus some history of event surrounding the prompt photograph.

I exhausted my hats and kissing photographs last year, so here is an invitation to join the crowd at a suffragette meeting and a hiring fair in the early 20th century.

Goodness! All those hats!

I have this one covered I think. It's a big story about a big hat, part history and part detective, and musical of course.

All I could see were hats...

No kisses but all 5 are wearing hats.

Late I know...but B&W photos of an interesting event in 1985. Some hats do appear in one of the photos. Blogger didn't show my SS new prompt until very late this week. (my excuse.)

I need to get back to recording some of my family information for the benefit of family members so this post doesn't relate to an image but is just the bare facts about the family that Peter Telford left behind in Scotland. I don't even have a photo of him