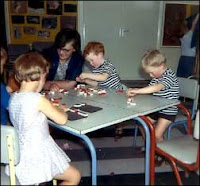 You know what it's like when you buy a new car : until you bought that particular make and model you hardly ever saw one on the road, but all of a sudden they are everywhere. I am beginning to get the same feeling about using the Internet to gather and study old photographs. At almost every turn I come across new sites and blogs that use old photographs as their central theme or as a means of stimulating comment or debate. But unlike the situation with the new Austin Metro, the knowledge that there are many others out there doing what Sepia Saturday does gives me a feeling of great joyousness rather than mild jealousy.
Tony Zimnoch and I grew up in the same northern town at about the same time. We knew the same schools, the same shops and the same dance halls. No doubt we knew some of the same people. But we never actually met until the back end of last year, having discovered each other through our mutual interest in blogging. Indeed, it is Tony you need to thank - or possibly blame - for my range of current blogging activity, because until he became a follower of my News From Nowhere blog, I had been blogging for the exclusive enjoyment (?) of three friends and a dog. By following Tony's endlessly fascinating blog, I discovered just what a creative process blogging could be - and I also discovered a world populated by friends.
In his Sepia Saturday post last week, Tony told a fascinating story of how he discovered a photograph of his mother on a Facebook site devoted to old photographs of Halifax (the town we both grew up in). It was a photograph he hadn't seen before and for me it just seemed to sum up what a magical experience photographic hunting can be. I can't retell the story any where near as well as Tony told it, so if you haven't read his post, read it now.
My holiday and the broken routine means I am a little late in putting up the Sepia Saturday call this week. For that, apologies but, better late than never, here goes :  roll up, roll up, roll up for Sepia Saturday 29. SS29 will take place on Saturday 26 June 2010. New sepias and old sepias are equally welcome. Just sign up on the Linky List and start your photographic hunting expeditions.
Posted by Alan Burnett at 09:25 15 comments: 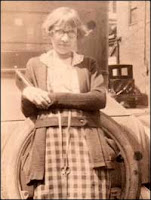 I am full of apologies tonight. My first is that this call is going up so early - the sun has hardly set on Sepia Saturday 27 and here I am pestering you to take part in Sepia Saturday 28 (19 June 2010). My second apology is that I will not be able to take part in Sepia 28 myself because - as I mentioned last week - we hit the road first thing tomorrow morning and we will not be back until the 20th June. And because I have been so busy trying to remember what I need to pack, my third apology is that I have not had time to do my normal tour of Sepia posts. On my return I will visit all the blogs and catch up on the Sepia 27 and Sepia 28 posts.
But I have managed to have a quick look at quite a few of the Sepia 27 posts and I have to say what a pleasure it is to welcome new members to our little group. Reading first-time Sepia poster, Natasha, - see Today's Gift - I was struck by the way we all delight in the same mysteries, the same types of observations, and the same unanswered questions. They are all part of the joy of old photographs, and Natasha's investigation of the photograph of the woman who is probably her Great Grandfathers' sister sums up the process so very well. Our usual warm welcome to new members joining in with Sepia 28 and welcome back to all our old friends. New or old, all you need do is to link your Sepia 28 post using the Linky List below. I look forward to seeing all your posts on my return home.
Posted by Alan Burnett at 06:05 17 comments: 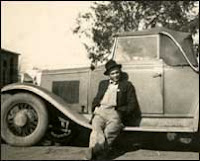 I always find when browsing through everyone's Sepia Saturday posts that my eye gets caught by a picture for no other reason than it is a great picture. It is not that it is old (which it usually is), nor is it that it is accompanied by a fascinating explanation (which it invariably is), it is just that it is the kind of picture that proclaims (in bold upper case) LOOK AT ME. One of my oldest blogging friends, Larry Burgess, had such a picture of his Uncle Kenny on his post last week, a picture which makes you want to find out more about Kenny, who Larry quite rightly says, looks so cool in this shot. Larry is one of the Sepia group who has set up his own blog devoted to his Sepia Saturday posts - Larry's Sepia Saturday - if you've not seen it yet, it is well worth a visit.
I will be away most of next week, so be warned, I will be putting up the call for Sepia Saturday 28 before the sun has set on Sepia Saturday 27 (well, if you live in the Tonga Islands that is). But whenever the call notice goes up, it says the same thing : come and join us at Sepia Saturday and bring along your images that proclaim "LOOK AT ME".
Posted by Alan Burnett at 09:34 18 comments: 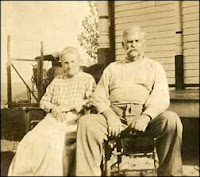 I have often noted how our American posts on Sepia Saturday frequently tell the story of great population movements. Not satisfied with migrating from the Old World to the New World, within a generation or so, families will load their possessions into covered wagons or old Model T's and move from Virginia to Ohio, Ohio, to Kansas, and then Kansas to California with a courage and determination that can only be admired. This contrasts with the situation here in Britain where, on a fine day, I can comfortably walk from where I live now to where my great-great grandfather Joseph Burnett was born over two hundred years ago. But such stereotypes are always flawed, as I was reminded by the lovely post by Cindy on last weeks' Sepia Saturday. She used a photograph of her great grandparents sat outside the "home place" land which is still in the family today. The old house may be being torn down but the land remains and it is the land - and these old photographs of ours - that soak up the memories.
We will be having another round of memories this week on Sepia Saturday Week 26. Sign up on the Linky List below and share your images and your memories.