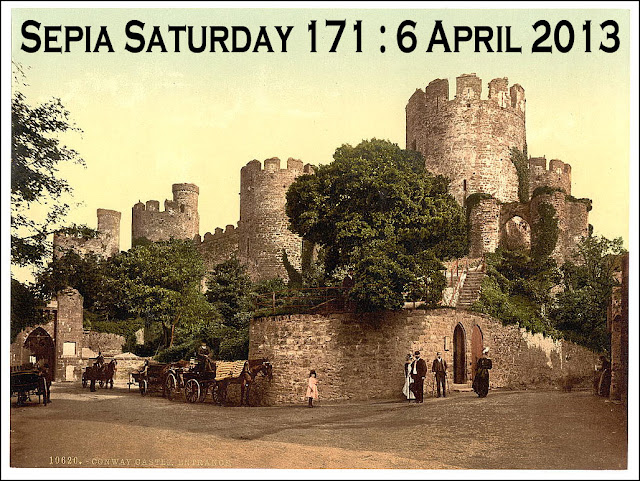 This year is the centenary of the introduction in Britain of the 1913 Ancient Monuments Act which recognised for the first time that the state had a duty to ensure the continued survival of certain key physical and historical remains. Pointing this out to me, stalwart Sepian, Marilyn Brindley, suggested that it was time for an old ruin (could she have been referring to me) or at least time for a castle. And so our theme image features an old photograph of Conway Castle in Wales which forms part of the collection of the Library of Congress which is available via Flickr Commons. You could perhaps feature a castle or a monument or a ruin or ... well the choice is yours. Just give us an old image and a few words of explanation and post your post on or around Saturday 6th April 2013 and then link your post using the Linky List below.

Before we cross the drawbridge and enter the castle keep, let us have a look at what lies ahead for Sepians during April. 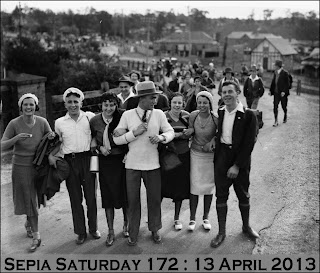 172 : Spring is just around the corner (we are told) and it is time to get your walking boots on, pack your haversack, and head out into the hills and valleys. There is nothing like a jolly hike (I am told). 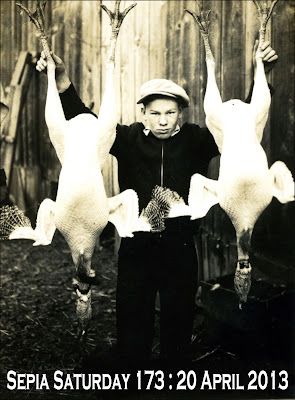 173 : Now this particular photograph is just plain odd. What on earth is going on here I can't begin to imagine. But we all have odd old photographs in our collections and here is your chance to feature them.

But for now, take your place on the battlements, it's time to pay tribute to all that is grand, all that is old and all that is ruined. As for me, in the words of the singer Meatloaf, "two out of three ain't bad".

Oh I haven't been first in a long while, but we're confined to quarters today because of high winds so I thought I'd use the time productively.

I delved into the history of The Beacon Blanket Factory which burned down in 2003, and has a movie being made about it by some friends of mine...so there are some links attached to my story of Swannanoa, NC

You've hit on a favourite topic of mine with Sepia Saturday #171, so we'll be touring around Irish ruins on my blog on Saturday. Thanks very much for the inspiration!

This prompt was right up my street. It was difficult limiting myself and making a choice. So here is my Border Castle Collection.

I was a bit spoilt for choice this week, but hopefully have selected some of the better ones in my collection, or if not "better" then those with a bit of a story to them.

I feel a real twit this week.

All set for Saturday! brings back memories of my trip to Ireland a year ago.

A ladies boudoir. Her little piece of the castle.

Castles and other views from me.

I have some recreations of English landmarks from a World's Fair.

I'm afraid I won't be around this weekend to visit everyone, but I hope you enjoy my photographs of Fussen Bavaria.

Back to the battlefield!

I confess, I might be stretching the theme a little bit this week, but I had to brag about my new hip! Happy spring to all!

At first I didn't think I had anything suitable, but then I remembered I had one ancient ruin that would let me stay on theme this weekend. With music of course.

Finally made it back this week! A timeless castle and it's town. Linda

Chillon, been there? Here a bit of its long history.

off-topic as usual from me

Some castles and a palace.

I'm in, but afraid I broke a promise I made last week.

For me, it is a palace and pyramids instead of castles!

hi Alan,
long time no post for me but pleased to be back and on theme for this weeks Sepia Saturday.
Ill do my best to hop round others posts too.

Well, here we are, well into Saturday and no Sepia Saturday post from me! My apologies, but I suffer badly from PDT (pre-departure tension) and what with cases to pack and tickets to print off and a host of other things to worry about, I am not going to have time to post this week. Nevertheless, I will use what time I have to put next weeks call up before we set off first thing on Monday morning. I will be back late next Saturday, so it will be a couple of weeks before I am Sepia posting again.

I have a castle this week.

I visited Herstmonceaux Castle for this week's Sepia Saturday. Hope the PDT has resolved itself Alan.

Finally someone has to look at my vacation photos!!! Please?

Not a castle but it does have an imposing stone wall.

I can give you castles! I restrained myself and kept to my most local one.

I've linked up a photograph of the gothic st Mary of the sea cathedral in.Barcelona and a poem it's inspired