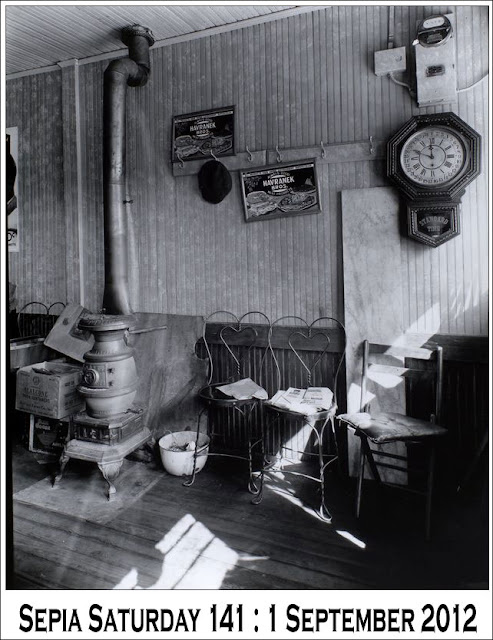 Good gracious, it's September already. Time flies doesn't it? You may have noticed that time did indeed fly after I had published the advanced notice of this week's archive photo : it flew from an alarm clock on a table to a wood lined cabin wall. This has little do do with the Special Theory of Relativity and more to do with the fact that I had forgotten I had used that alarm clock image before. So the archive image may have changed but the potential theme has stayed the same : "time and time again" so to speak. My eventual image for SS141 is a 1935 photograph by Berenice Abbott entitled "Country Store Interior, Ewen Avenue, Spuyten Duyvil, Bronx", and it is brought to us via the New York Public Library stream on Flickr Commons. You don't have to follow my thematic interpretation of the image, indeed you don't have to follow a theme at all : just post your old images and your new reflections on or around Saturday 1 September 2012, add a link to the list below, and take the time to visit as many other SS contributors as possible.

You may have noticed that I have updated the side-bar list of regular contributors. This update was based on those contributing last week and I am aware that I may have missed some regulars out, either because they did not join in last week or because I am increasingly incapable of reading my own scribbled notes. If you would like to appear in the list, just let me know and - in no time - you blog-link will appear. And now is the time for me to give you advanced warning of the next two Sepia Saturday thematic images (if you don't want to know, just close your eyes now). 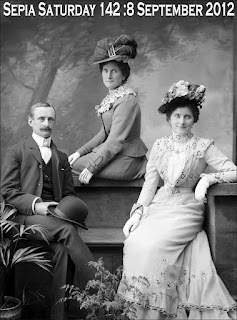 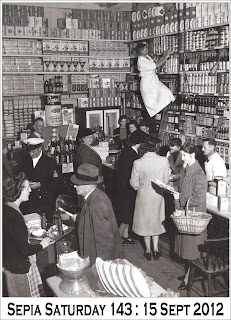 Right, there we go. There remains just enough time for me to ask you to join us all in having a good time at Sepia Saturday 141 on the 1st of September.

No need to alert you about my blog, it's there. Thank you!

My contribution this week - A Sad Watch Tale.

Thank you, Alan, for adding my blog to your sidebar listing.

Last week was the first time I participated - anxious to do so again.
Thanks!
Kathy

A treasured timepiece and a bit of history from me.

I nearly posted all videos but changed my mind - just in time.

We are going to move my oldest sister to a new home this saturday. So I did my blogpost today.

I just found the time to get this up before going away for the weekend, but it will be Monday before I get time to visit all the other posts. So little time, so many times.

I have a postcard of a "wonderful clock."

I've posted in a "timely" manner. Have a happy week end everyone!

My post is a twist on the theme - time for a home tour.

I am not the mimicking type but possibly I stay close to the Barbara and Nancy interpretation of the theme. Come and see for yourself!
Have a nice Labour Day weekend.

Thanks to Sepia Saturday I discovered I had more virtual clocks than ever imagined, but narrowed it down to two.

Repeat post but at least I made it! Sorry Ive been away so much

A captured moment in time.

Sharing with you what I may have discovered over time, and what I've kept as well...
And a little song too!
For those who like that kind of thing.
;)~
HUGZ

Didn't go with a time theme. The look of the room led me in a completely different direction.

Hello Alan, and speaking of time, what happened to August? It seems it barely arrived and now it's September 1st today! Time, is moving faster than I like! I hope you enjoy your weekend, we are all enjoying this 4 day holiday weekend celebrating Labor Day, and fun stuff like the fair!

I must be in a hurry! No my computer is, and Alan if you could, remove my first Karen S. is my Bones post (my computer stored it's memory and popped it on before I had TIME to switch it to today's Time post!

Hi You Guys! I have two this week ... the first is a story from a guy who found me through my blog about living simply on Smith River near Tin Pot Valley. The one I took a few liberties and tied in time and kindergarten by scanning an Eloise Wilkins book. Can't wait to see what you all have going!

I haven't participated in Sepia Saturday for quite awhile. Here I am at the tail end of it and looking forward to all of your posts.

A little tweak on the theme this week - "timeless" instead of "time and time again."

I'm off topic with a lovely smile :o)

I'm going to the beach with my grandmother and her friends in 1938.

I am only just in time this week, abd I bring you something from "another time".

I posted on time but forgot the time and didn't visit to leave my link.

I was missing last week and so my sidebar link is missing too.

Here I am finally, late as usually, actually 3 weeks late! Can you add me back to the side-bar participant list? Thanks!

A fascinating prompt, so a second short contribution here.

Not a post about time but about wood burning stoves in my life.