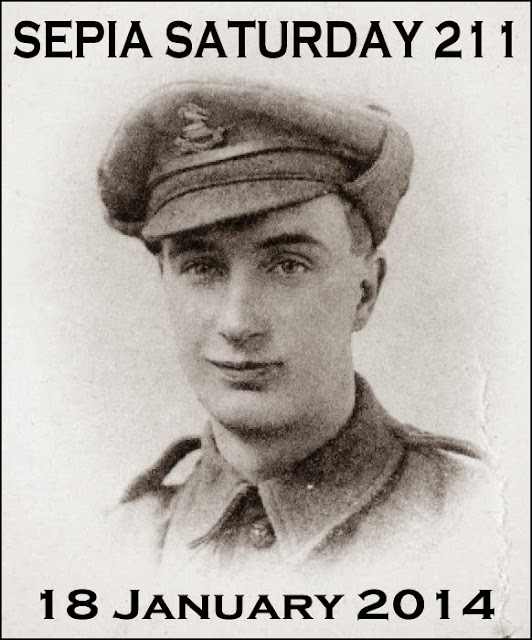 2014 is, of course, the centenary of the start of that conflict known as The Great War or the First World War. Although the age of photography captured previous major conflicts, the Great War stands out for both its devastating scale and the fact that by 1914 photography was in the hands of the people rather than the experts. So many of us have photographs of family members who were caught up in the conflict, poignant reminders of the scale of loss and sacrifice. Our theme image this week features the face of Private Morton Neill of 9 Battalion, King's Liverpool Regiment, who was reported missing, aged 19, on 30 July 1916 during the Battle of the Somme. He was just an ordinary soldier, commemorated now in the Faces Project of the Imperial War Museum which is available on Flickr Commons. Thus Sepia Saturday 211 provides us with a chance to remember loss in any of its manifestations. Just post your post on or around Saturday 18 January 2014 and then link your post to the list below.

Here is a quick preview of what is around the corner on Sepia Saturday:- 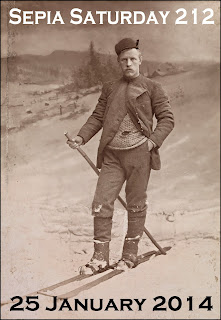 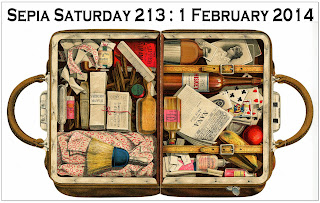 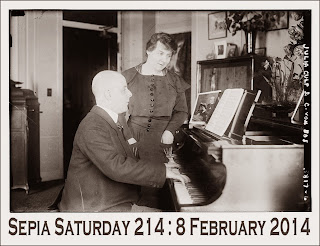 214 : Pianos and players - and pictures within pictures

But snow, travel and music are all things for the future, things to look forward to when peace and sanity returns to the world. For Sepia Saturday 211 our theme is of a more sombre nature.

The impact of war on one extended family.

With apologies - gremlins struck with my first link which seemed to go to last week's posting - here again at no. 3 is this week's contributions.

Sorry, had to delete my blog for tbis week as i need to amend something and can't seem to do it on my phone. I hope to repost it on Sunday or Monday at the latest.

No gremlins with mine, I hope.

Gremlins attacked my text size on my blog, making it too small. I couldn't figure out how to get it back the way I had it originally, but at least it is more readable now.

I also had gremlins that changed the order of the images in my post when I added a caption to the image!

I'm back and looking forward to reading all your posts. (I have a dog called Gremlin!)

Bringing back a post I wrote last year about my great Uncle Hugh Reed Averette who served in the US Navy during WW 1.

Though the sub-topic seems to be gremlins, I actually stuck to the theme this week. (I expect high honors for this as I stray so often.) I hated the movie Gremlins.

My post is a little lighthearted for the subject, but I'm hoping everyone will take it in the spirit it's intended. Salute!

Thank you for the inspiration. My post, entitled 'Those Young Men in Photographs, WW1' will appear on Saturday morning. Best wishes to all. Hope winter/summer is being kind to you.

Happily no gremlins only an unknown soldier.

The gremlins have been making themselves known, had them here on Monday.they did not freeze to death but ..so far they have disappeared. I will have an unidentified family WWI soldier and card up in a few more hours.

Not all those who served in the Great War were young men. A post about my great uncle, a surgeon who served with the Australian Light Horse.

I've been waiting for this theme with a special story about musicians from WW1. Even as I wrote it up today, I discovered another intriguing link with an early story I wrote about in 2012. Lots of cosmic coincidences.

A boat load of soldiers going to war, some to return, some never to return...

A bit of a rant this week. But, with gremlins in my family tree I guess it's to be expected now and then.

The only Sepia I could find this week was Little Georgie Fleming. Please welcome him.

My comment the other day wouldn't go through so I'll say again that this week I have deviated from the theme to continue a bushfire story to match our recent weather,

I thought I would skip the gremlin infestation since I had been away but ever since I opened the SS page, Google keeps telling me the page has become unresponsive and wants to close it. What have you done to this page while I was gone?!? Alan?!?