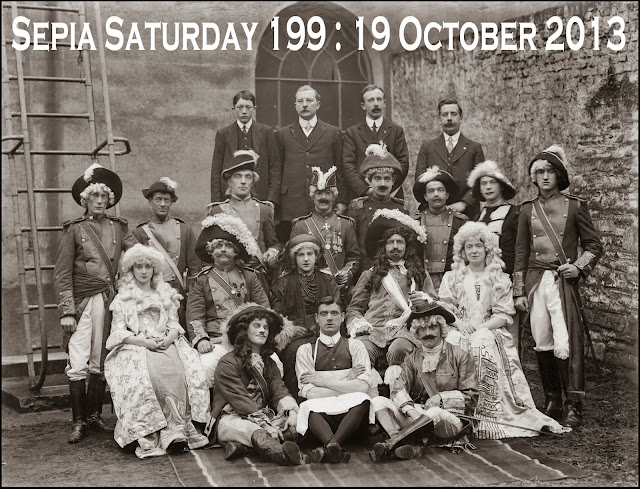 Hey, let's put on a show! The desire to dress up, lark around in public, utter words that you would not normally recognise, is as old as the hills - or at least as old as a string of Judy Garland films. Sepia Saturday 199 celebrates the theatre, be it professional or amateur, serious or comic, situated below a proscenium arch or behind a kitchen table. Dressing up, dressing down, acting daft or acting dreadfully - they all form part of the script for Sepia Saturday 199 (post your posts on or around Saturday 19th October 2013 and add a link to the linky list below). Our archive theme image was taken in 1914 in Waterford in Ireland and it has been suggested that it might be the cast of an amateur performance of the Pirates of Penzance. 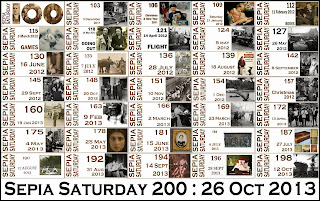 Before the curtain comes up on Sepia Saturday 199, let me add a few words about our very special Sepia Saturday 200. As I mentioned last week, our prompt for Sepia Saturday 200 looks back on some of the 199 Sepia Saturdays that have gone before. And to make it a special occasion we are inviting you to pick your favourite Sepia Saturday contribution - that is one of your posts and not one of someone else - and repost it for Sepia Saturday 200. And what I would like to do is to collect together all those contributions and publish them in a small "Best of Sepia Saturday" book which will then be available for any Sepians to buy on a non-profit basis. We could do this on one of the "publish on demand" operations that are widely available now, preferably one such as Lulu which has availability throughout the world. I would like to know what you think of the idea and any suggestions you might have. Obviously I would only include the posts of those who choose to participate in the book and I would require you to give me your permission to republish the text and images of the particular post you are contributing. If you like the idea, we will finish up with a nice little keepsake of our Sepia Saturday activities and even a little book that we can give to our friends and families for Christmas. Let me know what you think in either comments to this post or on the Sepia Saturday Facebook Group. 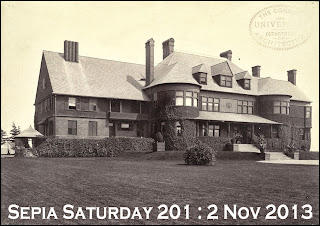 201 : Houses are such an important part of all our lives, be they big or small, stone or wood, brick or turf. So this week we celebrate our ancestral homes in old photographs.

There is lots for you to think about there, but don't think for too long at the moment - the curtain is now going up on Sepia Saturday 199. "There's no business like sepia business ..."

They weren't dressed up in costumes, but the notion of posing as they did for their Christmas photo was very amusing to me...

I don't think it will work to take the blog posts and use them in a print book because the web images are not an acceptable resolution for print.

I've been away traveling but did want to get back for the big celebration. I'm driving my husband crazy humming G&S songs.

Doing this early is the only way I'm going to get it done.

Choosing photos to share for this particular Sepia challenge was a challenge indeed since it deals with a subject very close to me. I have so many pictures and memories of my days on the stage. Granted they’ve always been small stages, but the experiences have been no less exciting or fun than on a larger one! :->

Like Kat I am a G & S enthusiast and taking part in student productions has been among life's highlights.

Re Alan's suggestion on a book, I like it, but don't have the knowledge to comment on Postcardy's s view of the technology.

I do like the book idea. I experimented with some of my pages and I think the images look acceptable when printed on my cheap inkjet printer even though they are not an ideal resolution. I tried both printing the web page as is, and copying and pasting the main body of the article without all the sidebar junk.

It would be nice to choose software that allows both printed books and ebooks (and not ebooks that work only on Ipad).

A great topic & an opportunity to brag about our daughter, the actress.

I believe I have another perfect fit for this weekend's theme photo. Send in the clowns!

I'm In this week (Brilliant photo of Yours Mike)

A couple of community theatre offerings from 1984.

I will be up soon with a blast from my past...this was fun and glad to be back with the Sepians.

You give me reason to live....

Mistaken identity on my side of the pond.

I'm very busy this week and will be quite late visiting, so if you skip me, I'll understand. Love ya still!

I cannot comment on those blogs associated with Google+ without putting in my date of birth which I think is private. I did, however, enjoy the posts.

I'm in the week and have gone for theatres.

My entry is done, now if only I could find that program!