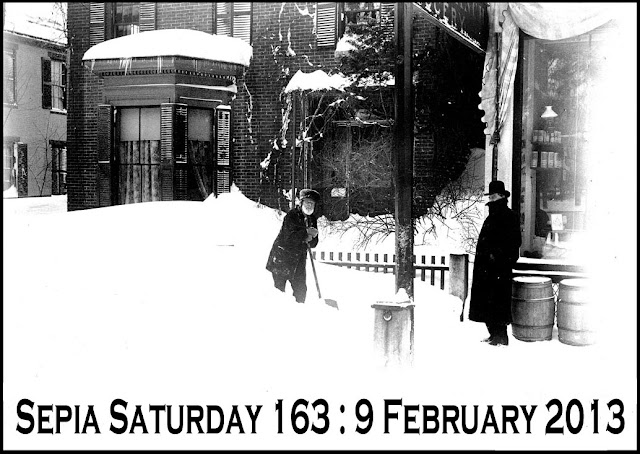 When I chose the theme image for Sepia Saturday 163 a few weeks ago, we were still in midst of winter snow falls. And then the snow went away and I was left with a theme image that was becoming more unseasonable by the day. But as I put this post together, I look out of the window and the snow is falling once again - the Sepia Saturday weather forecast has got it right. Of course there is snow as a potential theme, but there are also lamp-posts, long coats and those ubiquitous barrels again. You can dig out whatever theme you like as long as you post your post on or around Saturday 9th February 2013 and add a link to it on the list below. And, don't forget, if snow isn't your thing you can let the theme melt away like a snowball in an oven and post any old picture you like.

For those who like to plan ahead, here is a sneak preview of the next two Sepia Saturday theme prompts: 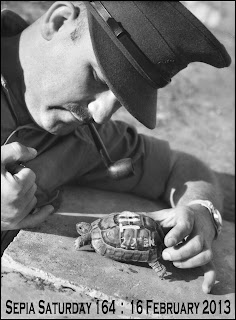 164 16 February 2013 : Let's slow things down to sepia speed. There are tortoises, pipes, watches and all sorts of other things in this picture. 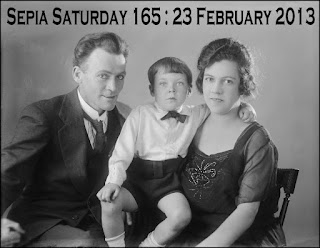 165 23 February 2013 : The photograph is called Group Portrait Of An Unknown Family. We all have some unknowns in our collections and this is their special week.

Such things are in the future, for the moment we are stuck in the snow. So get your snow shovels out and starting clearing a path to Sepia Saturday 163.

Hi! Here are some 1927 snow pictures of passing over the Old McKenzie Pass in Oregon by car and bus.

I bet nobody wrote about snow!

I score three on the 'Match the Prompt' scale.

Oh and I see I can't spell my own Nom de plume. Don't worry about the first commenter; she's not a spammer, just someone who clicked on my blogs in my profile and settled on the first one she saw, which happened to be SS!

After almost no snow since early December, we are now getting it everyday in February.

We are in the middle of summer in Australia, so not much snow about at the moment!

Arrived at the SS prompt in a round-about way this week.

Moving slightly at a tangent to the theme this week, but that's what it's for isn't it? To be interpreted.

Snow sculptures, playing with a gang of children, getting ready for catching smelts, and a peaceful tree laden with snow, I was glad this week's theme was snow, we have plenty of it here in Miramichi, NB Canada!!!

I'm In! I have to catch up on my visits&comments.But,Worry Not!I will be all over your blogs like a sepia-blizzard come the weekend!

An appropriate prompt this week considering we are expecting 18-24 inches of snow tomorrow. Whose idea was this? :)

My post may seem a little long this week but that is simply because I am experimenting during February with a weekly format. Sepians can happily ignore everything but the first part of the post - indeed you can probably ignore the entire thing. And fear not : I am busy thinking up a new experimental format for March.

I'm posting a little bit early for ME, but obviously later than a good number of Sepians. Heading to Jamaica in the morning - no snow there, I'm pretty sure!

I kind of got carried away, a caboose, a fence, snow, and another part of a train...sure, these are somehow related! And I am on topic a bit this week! Whoo hoo!

I'm still working on my acceptance speech for my Sepia Saturday award presented today in Fallbrook, but managed to squeeze in a few words about keeping warm.

I've gone all sporty this week. (My friends will be amazed!)

A very relevant theme as I have just got back from walking the dog in the sleet!

Ahoy - although do have a smattering of family snow shots, I already had this piece in the pipeline, so... there ya go.

No snow here ... yet, but I am sticking with the snow theme.

I'm very busy with work this week so not much commentary, just two nice views of a family home - one in snow, one in summer.

I'm in this week - having missed last week. I've not been able to leave comments as I like and apologize for that! Hope life will allow one day soon!

I have come up with my birth place, a famous alpine village and a famous ice skater.

Snow in the Northeast USA in the news... and in Nebraska in my post.

On again, off again that is the way it has been here. But I found a doozie one in 1888.
QMM

Apparently Saturday comes much later in California, at least on my calendar.

A letter from the 1969 New York Snow storm that happened 44 years ago today and I was there!

I'm ignoring the snow! Ha! Ha! But I liked your mystery man from the beginning- it was like, love at first reading!

Plenty to see,
but not a damn thing to say.
:D~
HUGZ

Didn't think I'd have a picture of snow but I do!

I'm back! Blogspot access reappeared...Yahoo!!! It's nice to be back!

A college girl in the snow :o)

Posing in the snow!

We've missed the snow in the Appalachians this weekend, so my post is off to Iowa were snow is more common.

I'm glad to be back with my post about sledges.

No snow in the picture, no snow outside.

Posted yesterday and forgot to link up!