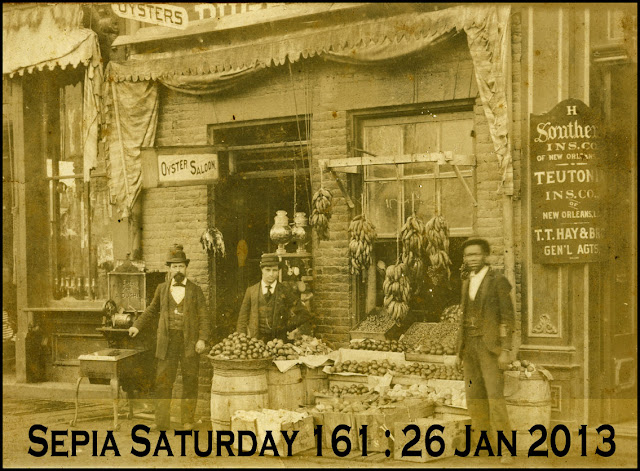 There are none of my uncles or aunts in our archive theme image this week. But there is a lot going on in this hundred year old photograph of the Dughi family store in Raleigh, North Carolina. The photograph is part of the collection of the State Archives of North Carolina which they have made available on Flickr Commons and they inform us that the two gents on the left are Antonio Leo Dughi and John J A Dughi. As I have already suggested, you might want to go with old store fronts, oysters, fruit and veg, barrels, or odd machines on curved legs. Or you may find some other potential theme in there; or abandon themes altogether and go with any old image. The choice is yours and, if the front of Dughi's store is anything to go by, there is plenty of choice available inside. Just post your post on or around Saturday 26th January 2013 and link it to the list below.

Our Sepia Saturday Facebook Group is going from strength to strength and they have asked for a little mini banner which people can put on their sites to direct people to the group. I have produced one, but I am not sure how people will be able to use it to steer people to the Facebook Group. I will throw that question out to that group and hope that an answer emerges.

I have also put together a little banner which can be used to draw attention to the post I wrote last week (or rather, the one I wrote along with Auntie Miriam, which looks at how Sepia Saturday works. As her fans will instantly recognise, the mini banner features Auntie Miriam herself.

Now let us have a look ahead to the next couple of Sepia Saturdays. Here are the next two theme images for those who like to work on them in advance. 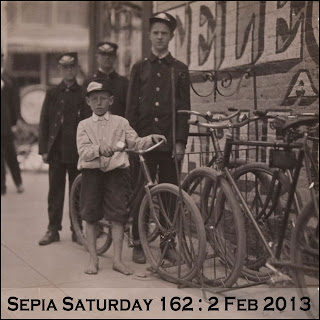 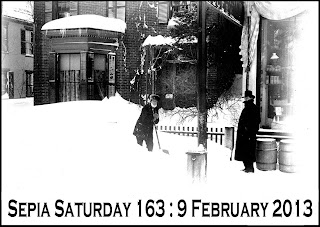 163 9 February 2013 : Snow, snow and more snow. But there is also lamp-posts, long coats and those ubiquitous barrels again.

So, there we go. Sepia Saturday - there is so much to choose from. Who needs an oyster saloon when you can have so much fun with old photographs?

Hi! This one is another chapter from Tin Pot Valley, and I was lucky to find photographs that matched the story from off of the internet.

I have tried several times to link my post to this weeks sepia saturday. Keeps linking back to posting two weeks ago when you put up the idea for this weeks topic.
Oh well.

I have an early 20th century Minnesota storefront

I thought I'd get in early this week!

Someone suggested my post would be perfect for this theme, and they're right. Hadn't seen this page before, but I may participate in future themes, if I have an appropriate photo.

I thought I would be numero uno, but I was beaten. They must have been waiting

I'm revisiting a previously featured photo this week, with new information identifying the location, thanks to a sharp-eyed enthusiastic reader.

Luckily my husband's grandfather was storekeeper and we have a few photos in the album. I'm looking forward to reading all the blogs on this theme.

Life Goes On : I am not sure what is happening. You will need to change the URL on the linky list to the URL of your latest post. If that doesn't solve the problem, let me know.

You have to get up early (in the week) if you want to be the first here :)

I'm told that oysters are an aphrodisiac. Ah well - shame I don't like them as they disagree with me.

I remembered one cute photo of my Dad at two, and his friends, standing in front of a rural country store.

I would have loved to have had a photo of my dad outside his shop, but I haven't got one so you'll just have to imagine that bit!

Since I've blogged twice about my grandparents' store, I'm focusing on "the help."

I'm once again thematic this weekend and Alan's clever choice has inspired some musical fiction.

looking forward to meating you again this week.

From the Facebook discussion on photo editing, I've been inspired to look at how it can save an old photo. Plus it almost ties in to the prompt with some blurring, heh.

Having looked at Flat Caps last week, I am continuing the hat theme here. I never realized that men had such a wide choice! Where have they all gone to be replaced by the ubiquitous baseball cap!

First I wanted to post old prints of antique fruit markets but then we had this famous dessert and I thought of somebody else..

I've got a mystery cleaners on the old westside of Detroit taken during (I think) the 1930s.

Would you believe a statehouse was once a storefront? Check out my post.

An old store with an interesting cash pulley system - and links to my ancestors.

Yay! I have one on topic from the Williams' family photo album.

One of the only ones granny identified.

I mean she identified the shop. Not the people...

Auntie Miriam seems to have squeezed into the picture again. Don't blame me, she has a mind of her own.

Hi everyone, I've posted a vintage (50s) car and my family. Sorry I couldn't connect with the picture this week (again). I've often proved to be an independent cuss.

I managed to find a shop for this week's post

It's my husband's family today. A banana house with no visible bananas.

I found a fish shop!

My post is up and I will be delayed reading posts for this week as I am still visiting and commenting on last weeks!

On theme this week :o)

I think I got the URL right this time.

Oh my gosh! I just posted on Saturday, morning still and I'm number (am I really just a #) hahahaha! # 41!!!!! I'm exhausted already. BUT! Gee I just caught a look at your photo for Feb. 9th and I feel a mystery lurking ahead! Happy reading for us all! :)

I just keep ending at the end of the list. Been so busy helping handsome husband investigate some health issue. All is good. I had an interesting week so went with the black gentleman as my theme.
QMM

I'm in, just. Been a bit under the weather and I have rather a BIZARRE offering this week :-)

Shop fronts in the plural for my offering this week, or, the demise of the High Street.

My sad lack of personal photos that could relate to this theme stymied me. I'm amazed at how many people have such perfect thematic sepias and how they find them in their shoe boxes is mind boggling. In desperation, I peeled back the decades and skidded into the world of
sliding Bill who made hay on the funny side of bananas.