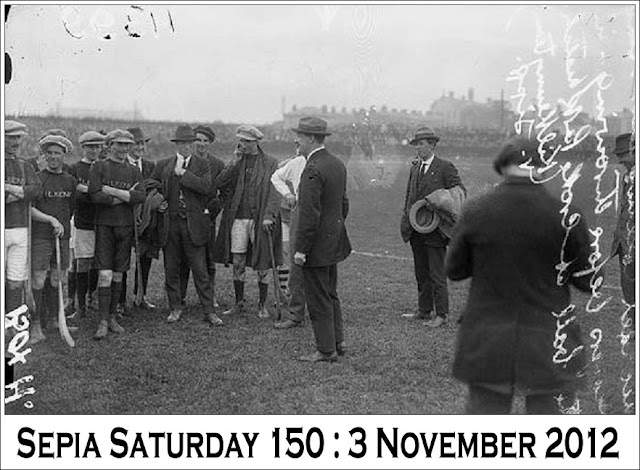 Anyone up for a little deciphering?  Can you make out what the (albeit reversed) hand-writing says on the right-hand side of this image? Here's a snip, rotated, enlarged and cross-processed. Any luck now?

Once again, I'm afraid we've got MEN, or at least men and youths.  Now, I've not seen it before, but I know in Ireland they have an odd sport called, "hurling".  I'm pretty sure that that's what's been going on here.

I would love to know what those buildings are in the distance.

Lots of hats - men's hats this time, and as someone mentioned (might have been Marilyn, I can't recall) that one fella looks like he's on a cell phone, but since this image is from  the 1920s, that's quite an anachronism!


This is actually Irish Revolutionary Leader, Michael Collins, at the Senior Hurling Championship match against Dublin on September 12, 1921. He's talking to the Kilkenny hurlers at Croke Park in Dublin.

(Collins would be assassinated only a year later, at the age of 32, on August 22, 1922) Now I'm wondering what that other fellow might be reaching for in his vest pocket?

Here's a sneak peak at the next two weeks! (Alan's choices.) 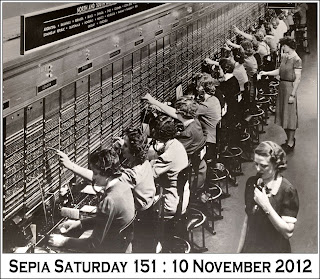 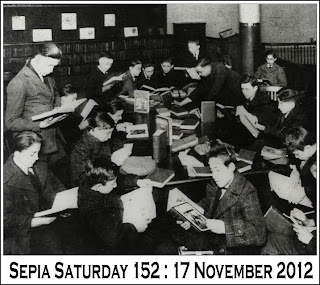 By the way, don't forget to sign up to "follow" me and other SS participants, and I'm sure they will do the very same, as will I.

Please post your links below, and visit all our fellow Sepia Saturday members to read what they have come up with as the result of pondering this image:

Oh, a little poem for you this time.

Wow, I am surprised that I am second. Where is everybody at? I worked away to make mine on topic, and here is the title: "Strip Tease at the Sawmill". It is a Tin Pot Valley story.

I've got sticks and hats so I think I'm on topic. It's a very special post with no music, but some family history instead.

Doffing my cap to three generations of little boys.

Don't read me wrong, I am on topic, I think.

Little Nell and I are in sync.

I'm in to hurling.

I have got a little glimpse of 1956 Olympics in Melbourne, it has nothing to do with hurling.

Having been away for weeks I need to get back in the groove. My submission is barely on theme in that it is a group of people doing something that makes no sense to me.

I went with deciphering writing on a photograph. And a man in a hat with youths....

Maybe that fellow with his hand in his pocket has the prize money. I have not posted yet can make up my mind.
QMM

My post relates to baseball, that is a sport, all the men in my picture are all dressed up and all are have donned on hats, so you could say, that this week, I am slightly on "theme"....

Not a thing to do with this theme, just something I wanted to share. Well there is a start with photo of a group of graduates

So much material in this photo! I wonder what they were all laughing about, or chortling?

I have picked out Dublin as my theme from this week's picture. Now off to chase the leaves around the garden.

I hit upon mirror writing...it'll drive you nuts!

I'm in too, kind of at the bottom- yay for Kat first on in- but as of yesterday I didn't have a thing- still looking at Kat's photo for the perfect thing! I found it! Enjoy your weekend- especially those that have a whole extra hour this weekend-with the falling back of daylight savings time! Yes!

I show a few of our adventures about playing outdoor.

Comment to Tattered and Lost, I gave up trying to leave a comment on your post, the word verification kept rejecting my verson after maybe 20 times.

A sporty photograph this week :o)

Better late than never. Here is a family photo of President Kennedy before he became president.

Time to spot the bonnet at the bullfight!

Late as always but my men do have hats.

Hurray! I have visited everybody and responded to all my comments. Not bad for someone with a TIME CHANGE hangover. (no alcohol involved)