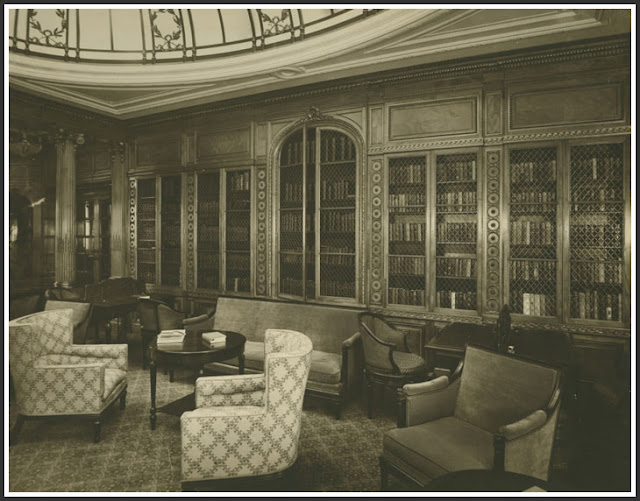 Now I know what you are going to say. You are going to say, "hang on a minute, I am sure when I checked the Sepia Saturday call earlier today it said SLEEP". Well all I can say is that you must have fallen asleep and dreamt it. Of course it isn't sleep, because we have had that before as a theme. It is actually LIBRARY because it is National Library Week between the 8th and 14th April. And to prove it, here is a picture of the library on board the ill-fated liner the Mauretania (courtesy of Tyne and Wear Archives via the one and only Flickr Commons). It might be a bit of a challenge, but remember, you can interpret the theme in any way you want, or you can ignore the theme altogether. You can even post a picture to match the theme SLEEP if you want. Whatever the subject of your old image, post your post on or around Saturday 7th April and link to the list below. And talking of lists, I really need a list of past themes before I make a silly mistake.

I floated the idea on the Sepia Saturday Facebook Group the other day of providing a little more warning of the upcoming themes so that people were not having to rummage through their collections at the last minute. So, as an experiment, I thought I would try announcing the proposed themes for the rest of April now (if you like the idea we can introduce a rolling process where the next four themes are listed with every Sepia Saturday Call). The themes for April are as follows:
The "flight" theme (SS121) comes from a suggestion from Marilyn Brindley (Little Nell) that we might want to mark the centenary of the formation of the Royal Flying Corps which falls on the 13th April. SS122 (gardens) is a bit of a commemoration as well as it will coincide with National Garden Day in Andorra (yes, I have made that up in order to cover yet another error in the archives). If anyone has any suggestions for future anniversaries we might want to mark with a Sepia Saturday theme please let me know - with as much advanced warning as possible - and I will try and incorporate them into our rolling programme.

So get yourself off to the library for now and get your thinking caps on for the future. And if you still have any energy left, how about applying for the following job:-

and just in case you want an alternative you could try -

Awww, I was going to suggest Libraries as the next promp as National Library Week is April 8 - 14but I guess I'll just have do my libary post on a different day. or maybe go off theme.

Kristin : No libraries would be perfect, it's as though you had read my mind!

Alan, this is a great idea! I do have a flight one in mind already; I like being able to plan ahead. Thanks!

I love the idea of planning ahead. This will give us more of a chance to dig into those old archives and then wait until the last minute to post our story!
Love the library idea. But I have no idea what I'm going to do.
Nancy

Great! Now I can start looking for my library information.
I just went back over the posts and see what an evolution has taken place on Sepia Saturday. One thing that remains constant is that Alan is always going out of town. Where are the first 9 posts?

Oh, I just came over here to offer my regrets. Very disappointing too, because I have a library post planned for the following Monday. I was going to try to move it around, but I have too many other things in the way. I look forward to checking in on the other posts anyway.

Thought I’d better get to the library before it closes ....or before the theme changes again!

I'm in with this week's library theme.

Libraries are no places to go to sleep.

My contribution is early this week as I have a busy weekend ahead. But I managed to touch most of the themes (although I could find no midget submarines)

Ignore my first link as I reposted last weeks!

Wish I had a picture of someone sleeping in a library.

I like the new list of themes. I'll have to get to the library for some research.

I'll sleep later, too much work and holiday stuff going on, and I'd rather spend my free time at the library! So off to the library I go! Tee he ha ha! See you all there okay?

Going with sleep - since I battle insomnia I'd love some extra sleep. :) Have out of town company for Easter weekend, so I'll be busy but will do my best to check in with everyone. Have a great weekend!

Watch the Anglers Rest blog tomorrow - there will be three posts, this week & the last two as I forgot to move from draft to schedule!

Have a good Easter everyone.

Yawn! A book at bedtime? I'm afraid I've gone off theme this week. Still sepia though.

I'm in with a fantastic Ivy League find.

Well here is my offering. I too like the idea of knowing ahead of time. Thanks for coming up with that. I had no old photos of libraries so just went with my own little collection.
QMM

Ultimate Sleep on mine :)

I'm glad we finally know ahead of time what the upcoming themes will be.
:)~
HUGZ

The library theme for me! Like the others who've said it before me, I do like having some idea of the future themes.

After suggesting the Library theme for this week I got side tracked with exploring the newly released 1950 US Census and finding my family and am not ready with what I wanted to do. Something will appear though.

The Library theme was a great idea! I've booked my entry!

Yay! Caught up and posted today's entry and the last two weeks. I would tell myself off, but we are in the library!

Great with the plan for the next few weeks.

I pieced something together...

I am late! I have posted one of the most beautiful libraries in the world. Enjoy.

I like knowing the themes ahead of time...of course we can always freestyle and follow or not, still it does help to know which photo or scans to check on initially.