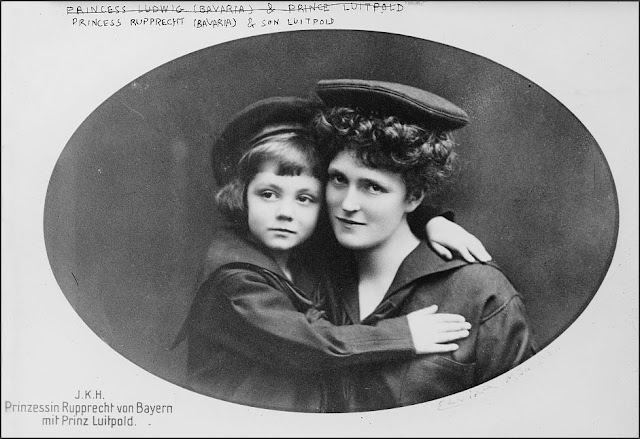 I won't be here for Sepia Saturday 104 (post your posts on or around Saturday 10 December 2011), but by now everyone knows how it works, so all you need me to do is to set some kind of theme for those who are theme-minded. And seeing as I will be spending a few days in Bavaria, what better choice for my archive picture this week than this delightful study of Princess Marie-Gabrielle of Bavaria and her young son Prince Luitpold. The photograph comes from the Bain Collection  of the Library of Congress and they suggest a date for the photograph of between 1910 and 1915. The latter end of this timescale is obviously wrong for the Princess died of renal failure in 1912 whilst the young Prince died in 1914 of polio. He was born in 1901 and he looks about five or six in this photograph which would date it as 1906/07. Marie-Gabrielle's husband and Luitpold's father was Crown Prince Rupprecht of Bavaria who survived the downfall of the Bavarian monarchy and two world wars, and died in 1955 aged 89. You can take whatever theme you want from the photograph or you can ignore themes all together : just enjoy yourself. While you do that I will no doubt be enjoying myself investigating the Christmas Markets (and the bierkellers) of Munich.

Isn't she lovely! Have fun in Bavaria! Sounds like a fun place to be this time of year.

You know you have set me up for a heart-breaker this time. At least with the original dates. But, perhaps it is best to tell the rest of the tale while the 'iron is hot.' (I blame my mother for all these colloquialisms!)

You will have to tell us if Bavarian German is richer in colloquial language on your return. Happy travels. Post coming .... Happy Christmas!

P.S. I would really LOVE it if you would offer your consulting services to the LOC.

Liz : I will take lots of photographs of Munich and show some on the blog on my return. And you can tell the LOC that I would be honoured!

I'll miss this week's Sepia Saturday too, but this is a fine photo and a sad story.
I hope you enjoy those Christmas markets. I can almost smell the roasted nuts.

Have fun, enjoy yourselves and tell all on your return.

They look so sweet in their matching sailor outfits.

I struggled with this photo until I was saved by my son-in-law. A related couple, one uniform so it fits - sort of.

Haven't been here for a few weeks, I hope you'll have me back. My post this week is a seaside cinema from a century ago.

Have fun Alan. Don't eat too much chocolate. My post has nothing to do with that photo. lol

This is a wonderful photo, which, of course happened to play into what I was already thinking of writing about. I don't know how you do that, Alan!

Happy Sepia Saturday and I hope that you guys are having the best time on your trip. :>)

A beautiful photo with lots of potential themes. I chose German boys in sailor suits.

Sadly Marie-Gabrielle had 4 children and 3 had early deaths from disease, the young prince died of polio in 1914.

Enjoy the best of beers Alan.

I chose a photo of my Uncle Henry Cleage as a happy baby with his mother Pearl. They both lived long lives, unlike the prompt subjects.

I hope you both have a wonderful visit.....I just know there will be magic in the air! Enjoy their beautiful holiday decor!

Lovely photo! I went with the Mother and Child theme too. Hope you've enjoyed your Bavarian weekend :o)

I'm on theme if you don't think about it too hard and have sort of an off the axis view of the world.

Happy Holiday and I love this photo.
QMM

I wrote of my father's relationship with his mother.

Nothing like a little Mom and child in an old Home Movie :)

A belated post from me. Featuring a Naval collar!