My apologies with getting behind with everything of late. I resolve to be a better person from now on. To start the process, let me put this call post up early for a change. 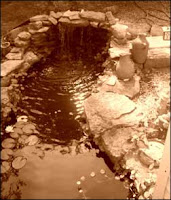 A new name appeared on our list of contributors last week - daylily - but it was a post from a Sepia Saturday friend, Queenmothermamaw. Qm3 has launched a new blog and taken on a new persona, but the posts are just as fascinating as always. The picture featured was a perfect sepia shot of a stream which could have been taken 70 years ago. In fact it was taken last week and digitally converted into sepia. Let nobody think that this is cheating : most sepia photographs were chemically converted into sepia in order to give them that aged look of respectability. Digital conversion is merely a new take on the old process of chemical conversion, and as someone who has done my share of the latter in my time I can tell you it is a lot quicker and a lot less toxic (I can still remember buying my first bottle of sepia toner some forty years ago and being made to sign the Poisons Book by the chemist concerned!).
So in asking you to join in with Sepia Saturday 35 (Saturday 7th August 2010) let me merely remind you that your images don't have to go up on Saturday (although if the post is earlier than Saturday try to make sure it is a link to the post and not to the blog) nor do they have to be in sepia (just an image with some history and some words with an explanation). All you have to do is to add your name and a link to the Linky List below. And enjoy.
Posted by Alan Burnett at 17:03

I'm super early this time! Just finished a post that works as a sepia saturday piece. (heh-heh, most of mine do, anyway)

Thank you to you both for continuing the host this great activity. The various posts I've read through the months have inspired me to be on the lookout for great sepia or b/w historical images.
Evelyn in Montreal

Each week I look forward to seeing new images from around the world. This week I'm featuring a compilation I've put together of unknown children from my vernacular photography collection. I think you'll enjoy them.

I've just posted some sepia landscapes this week. Hope you all like them, and thanks for the lovely comments last week.

This is my first Sepia Saturday, what a great feature! I'm going through the photos in an antique album a friend gave me, plus my large and growing collection of Victorian photographs. Hope you will stop by!

PS I'm known as Mrs Marvel on my own blogs and Norkio at others. :-)

In line with my announced resolution, my post is early.

Out of time this week but found something interesting....

I am new to Sepia Saturday - I do hope it's ok that I have joined; this is a wonderful blog. I have had a great interest in family history from a very young age and have a collection of photos; it's so important to tell the our family stories so they aren't lost over the years.

done mine!!
see you all on sunday, to give everyone a chance to post.
:)~
HUGZ

I have unashamedly followed Marilyn into your Sepia Saturday!! Your blog is wonderful.

I am definitely in! Once again, I look forward to a guided tour of the past.

In my enthusism to create a link(!) I omitted to say, that digital/sepia often adds special qualities to modern day photos, which are sometimes a little brash in their full coloured state...

Sean's link wasn't working for me. For others having difficulty accessing his post (not to be missed) here is a link to his blog :
http://eff-stoplocal.blogspot.com/

Hi Alan, to easy for us, great. I remember hobby photographs fiddling around with chemicals in their makeshift darkrooms. Even from year to year everything is improving. I do like the old sepia photographs but I am very fond of gray scale photos as well.

I'm stealing a minute from the garden to post -- will get around to visit bit by bit.

Thanks Alan, the link in the box was right but it got messed up in translation to the link on the page somehow. Looks like I fixed it now. - Sean

PS thanks for the votes of confidence, weirdly there's been some question of the worth of these texts, as we try to find a publisher. Don't worry, more will follow - I love this format.
I concur, thanks for hosting this great blog. B-)

Well Alan, thanks for the post today. Missing Barry and Linda for sure. I was worried I would be able to recap all my faves but this will help too. I have just about run out of personal pictures to post about, but have found my old home town bicentennial book to be priceless to me. I did not know about the plans for that book when it was published, but did find out to be able to purchase one. Been gone from there a long time. Great explanation of the sepia process. I never developed my own photographs, although I did develop thousand of x-rays in my time as a tech.Developing x-rays is nothing now, like it was then either.
QMM

Hey better late than never! I am privileged to share this blog with so many and wish to keep up with my reading and commenting. I will catch up as I really enjoy reading and seeing all the wonderful photos.

Okay, I have mine up. There are two because I'm starting a new blog. It's all Sepia Saturdays fault, LOL.

I tried to post, but could not upload my pictures. I will try to the next one. I'm having computer glitch issues. I used to teach black and white photography and when a new school was built, they chose not to put in a darkroom. I still have some equipment including sepia toner. (It smells lovely)

ok!! it's sunday, almost midnight here. i've done the round of all the blogs. thank you all for sharing all of those precious memories. see you all next week!!
:)~
HUGZ