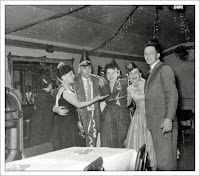 The "sepia" in Sepia Saturday is a general evocation rather than a defining classification. When Kat and I had the idea for Sepia Saturday we wanted a site where old photographs of whatever vintage provided the prompt for memories and musings. The word "sepia" was redolent of the photographic past in the same way that we hoped the photographs featured by all the many contributors would be redolent of a spread of decades and a spread of cultures. I always find that some images can proclaim a particular time in the same way that popular music can. As I look at the magnificent mix of images featured by all the Sepia Saturday contributors, I sometimes have an  imagined soundtrack playing along. With some pictures you would have the plucking of a pioneer banjo, with others the excitement of an early jazz band.  But with the wonderful pictures featured by Anita of the negativespace blog over the last couple of weeks it is the sound of Sinatra and the Billy May Orchestra. The photographs have the 1950s running through them : the sophistication, the modernism, the hope and the sheer love of post-war life.
You can keep my imaginary soundtrack playing for another week by signing up for Sepia Saturday 23 which will take place on Saturday 15th May 2010. All you have to do is to put up your post and then link by using the following Linky List.
Posted by Alan Burnett at 09:54

I am going to now follow the lead of everyone else and add my name to the Linky List after I have posted. That seems to be the way everyone has decided to to it and I have always been a follower rather than a leader.

I had a nice comment all ready to go and my computer decided to shut down and do updates.

You are so correct about the soundtrack music, Alan. Neetzy's (Anita's) photo of her parents is a classic, as was that era of music and film too!

I've got my book to the printer's and now I can focus on other things. I've even slowed down on the genealogy research. I'll be here for Saturday, for sure!

Shoot! I just realized that last week I did my post and then I didn't put my link in the list. As one of our Canadian Prime Ministers so famously said, "Fuddle duddle!"

I enjoy this so much and imagine my surprise to find that I am first this week, I have featured my grandson Antonio in an early Sepia pic then followed on to today. He has come through horrific times but I didn't wish to write that on the Blog or remind him. So I have kept with the positive to encourage him on in his walk through life.
God Bless All.

I put my post up early this week because I'm going out for the day on Saturday and I didn't want to rush it when I get back. Anyway it would be nearer "Sepia Sunday" by then.

Mine is scheduled to appear at 1.00am. First time I have used the "scheduled post" option so it will be interesting to see if it appears.

A sad fiddle tune is accompanying mine this week.

Done and dusted and I even remembered to come back and put myself on the linky list. Woohoo!

I've done the linky-dance, and I can't wait to see everyone's posts! What a great idea ... providing a soundtrack to the Sepia posts. I think I'll try and do it, too.

Mine's up, as of 2:15 a.m. Saturday. I wish I had better old photographs. My mom's album is filled with blurred, mottled, or out of focus images, with a few great ones every few pages. Ah, well. Looking forward to all the other posts again. Thanks, Alan and Kat, for coming up with the idea for this blog and publishing it.

It is a poor state of affairs when the bloke who is supposed to be organising this blog can't get his Linky Link right. I have entered a new link which hopefully this time will point to my post - or to something of interest.

I've posted a couple of my favorite old photos that hang on my walls to remind me of my roots. Looking forward to visiting you all on Saturday. If my Linky code didn't work in the list, it is also here ... I hope.

I visited a few of you early-birds last night, but family matters prevail this Saturday morning, so I'll have to swing by the rest of you later in the day. Kat

I like to add my link after I post as well. However sometimes I forget to put the link in until after you early risers in Europe have checked out other sepias. Oh well my bad! I'll just have to post on GMT instead of EST. haha

Mine is late today too, but it is there and if some of your are like me it takes a few days to get around to all of them. Yes linking after posting is the better way.
QMM

I haven't participated for the past several weeks, so I'm looking forward to jumping in again today.

Thanks Alan! My folks were HUGE Sinatra fans. They were also from the Northern New Jersey/New York area from whence he came! I'll see if I can come up with one more slice of the fifties!